We celebrate the new year with news on the upcoming release, which bundles many exciting features.

First and foremost, the new RESTful API with an OpenAPI specification makes integration into various development and deployment toolchains much more enjoyable. Since most of our customers already integrate Halon into their directories and control panels by making REST queries from Halon, it makes perfect sense that Halon can be provisioned in the same way.

Secondly, we’re introducing a new end-of-DATA script that’s executed once per message, as opposed to the per-recipient DATA script. Whereas the per-recipient version is convenient when you want to treat each recipient individually and let the Halon software take care of queueing and consolidating the respective actions into an SMTP response, the per-message version gives you maximum flexibility and control over execution. The $transaction variable is populated gradually during the SMTP conversation with sender information, and an array with recipients accepted by each RCPT TO command. To then relay a message to its recipients, you call Queue() for each $transaction["recipients"] and then Accept(). Making per-recipient message modifications using the MIME() class is now easier thanks to the new snapshot() and restore() methods.

The code editor’s built-in CSV editor now supports custom form controls, defined like a “schema” on a per-file basis using a JSON format. You can use checkboxes for booleans, select controllers for enumerated types, and input fields with validation for things like dates, email addresses or any regular expression you like. It makes it much more convenient and safe to create and edit lists and settings that you want to have in your Halon configuration file. 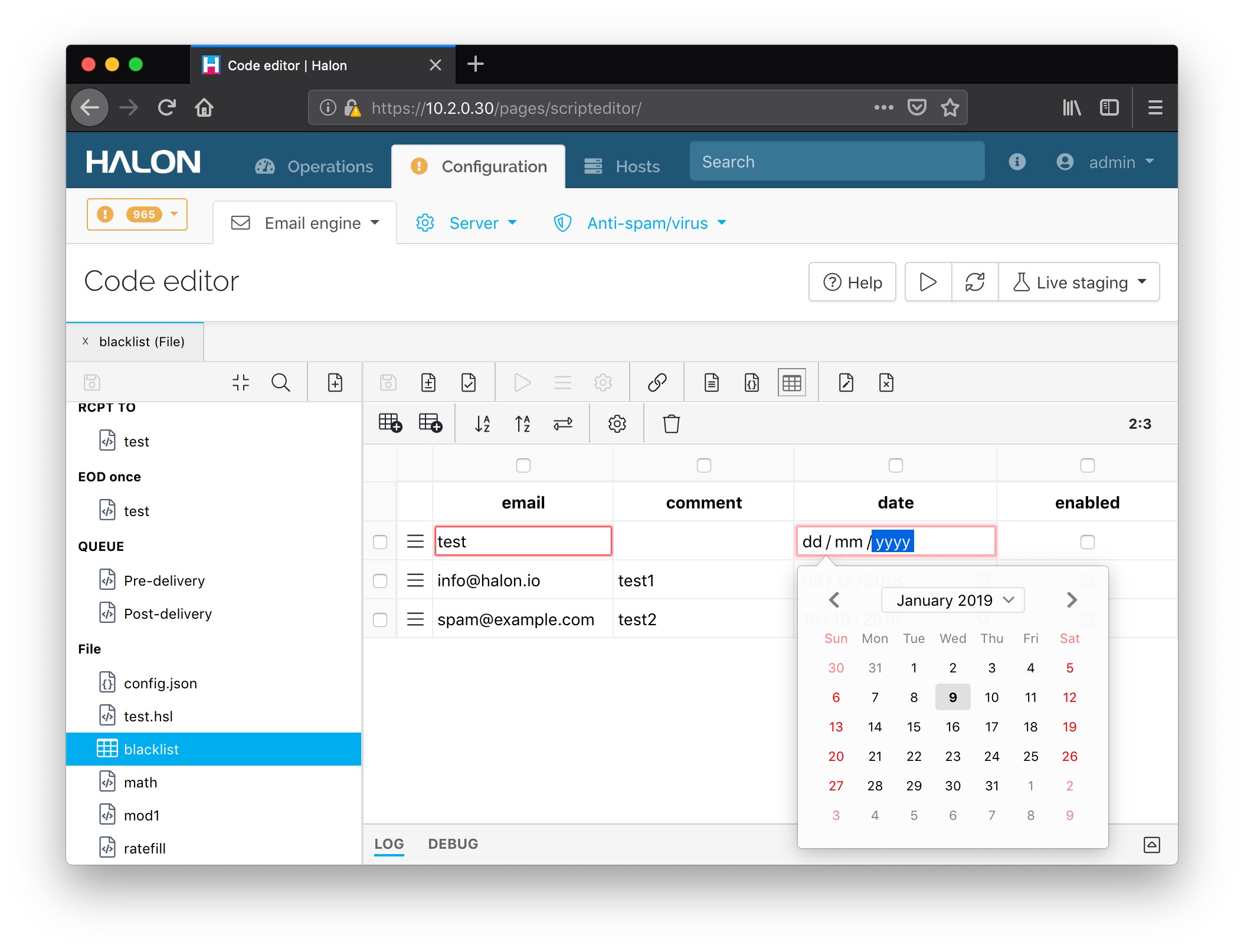 There’s a new LDAP() class that replaces the previous ldap_ functions and LDAP settings in the configuration. It provides greater flexibility, and an improved usage pattern using an iterable LDAP result object.

Finally, there are massive under-the-hood improvements. There’s a new on-disk YAML configurations with JSON schemas and Protobuf control sockets, which is used by the componentised Linux package’s new Visual Studio Code plugin and command line tools. The integrated package is built on FreeBSD 12, which ships with OpenSSL 1.1 and thus TLS 1.3 support. It was published as a standard by IETF in August last year, and is much anticipated as it contains many security improvements over previous TLS versions. The queue database is now using the latest and greatest PostgreSQL version 11.1, and the queue is automatically migrated on boot as usual.

We have that you’ll like this new release as much as we do! Check out the full changelog on GitHub for more information, and familiarise yourself with the important changes outlined in the release notes document before upgrading.

Verified email brand indicators on iOS 16 with the Halon MTA

As demand for secure, safe and timely emails increase, companies need to future-proof themselves in ...

Email deliverability: It’s not as difficult as you think

By Andrew Bonar, emailexpert. Industry insiders will often talk about the differences between delive...